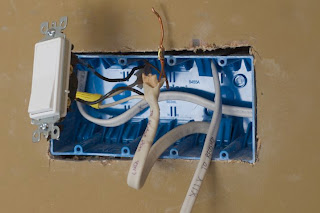 The first thing most people do (rightly) when they see a bulb flickering is try to replace it, or just chalk it up to bad weather or a momentary dim from a momentary glitch. Most of the time, this is all a flicker denotes but some flickers (think a three-to-four-second flicker) can become annoyances and represent a fault that requires either immediate or forthcoming repair.  Now, to be sure, we’re not talking about the expected dims that can come from CFL bulbs (the twirly, spiral energy-saving ones) connected to dimmer switches, but rather repetitive flickers that usually coincide with other electrical usage.
Consistent flickers are usually due to a poor connection in your wiring, affecting a singular part of your circuit. If an entire circuit is affected, the source of the problem will likely be in the breaker or, less frequently, the panel; the panel is a regular source for flickers on an entire circuit. But we’re talking about consecutive flickers coming from a single source. For an example, let’s say an overhead light is flickering every time you turn it on at night. The source of the problem will almost always be spotty connections coming from the light fixture, the switch box or the outlet. To help diagnose which one it is, one should mark when the flickering occurs and for how long. For instance, if it starts immediately as you flip the switch, the likely culprit is the switch box. It’ll make for an easier project, whether you’re trying to fix it yourself or you’re hiring a professional.
Though this seems like a minor issue, these problems almost always cause arcing, which can heat up connections or wires and lead to further problems either with the single fixture or the overall circuit if it goes unchecked. Smaller, fickle outages will likely be unable to be diagnosed until they erupt in an outright open. In any case, the rule of thumb here is to trust a professional electrician with these problems though, if you do go DIY, be sure to shut off electricity to the entire circuit if you’re attempting to replace or repair the wiring or connection.
Posted by Unknown at 11:05 AM